Into the Spider-Verse Review: This Awesome Multiverse Doesn’t Even Need the MCU 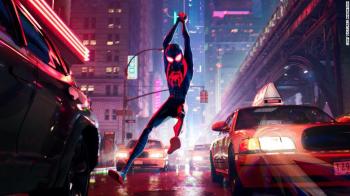 Into the Spider-Verse is such a zany and offbeat version of Spider-man that it’s really unfair to compare it to any of the live action movies over the past fifteen or so years.

While those try to put Spidey into a more realistic universe or shoehorn him into the Marvel Cinematic Universe, this new animated version has no interest in that.  From the moment the Comics Code stamp is flashed on screen, you know the medium and rules that this film is staying true to.

While the multi-verse spanning narrative of bringing all of the Spider-people together is a huge factor that sets Spider-Verse apart, it’s really the kinetic art style and frantic pace of the movie that’s front and center.  Characters and backgrounds are splashed with ink, pop-ups appear with sound effects and thought bubbles, and the movie often has no interest in the normal rules of cinema or even reality.

The story itself is just as fun, mainly following the more recent addition to the Spidey-verse in Miles Morales.

Miles is a more hip and up to date version of Peter Parker, representing a more diverse readership and modern sensibility.  (For example, Spider-man listens to Post Malone now?) None of this distracts from one huge factor of Spidey though: he’s still a huge nerd.  Though he adolescently protests it, Miles attends a school focusing on STEM education that proves to be a solid background by the time various versions of the Parker lineage begin to mentor him.

After a first act or two that sets the story up, things go off the rails in such a ridiculously fun way.  It would be too much of a spoiler to describe anything beyond the various Spideys that begin to cross paths, varying from an anime-inspired mech pilot to the role that two different voice actors were born to play.  Seriously: If you haven’t seen any trailers or promotional material, DON’T.  You’ll be in for the best Christmas surprise(s) perhaps ever.

Into the Spider-verse is also an Easter Egg hunt on an awesomely grand scale, which is one reason to see it on the hugest screen possible now instead of waiting for streaming.  For example, all of your favorite memes are referenced in one way or another.  There are also of plenty busy scenes in which a name, character, or other Marvel property are hilariously referenced.  If you see the movie with other Marvel die hards, you’re likely to hear a smart-aleck or two laugh out loud behind you in delight.

This new Spidey is such a delight in so many different ways.  It’s crazy and colorful enough to delight the younger kids, and it’s knowing and deep enough to appease the most devoted Marvel Zombie.  Hopefully this new universe appeals enough to everyone that Sony feels compelled to make this their new comic playground to stick around in.