(David Hitt is a Communications Strategist with NASA right here in town in Huntsville, where he’s also a tour guide at the Huntsville Depot and a volunteer with the U.S. Space and Rocket Center.  Our thanks to David for this amazing guest article!) 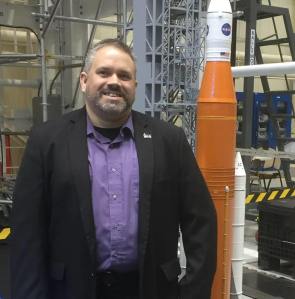 I was too young for the window-rattling.

If you’ve lived in Huntsville any amount of time, you’ve heard the story – ingrained into the very DNA of the city – about the Saturn V engine tests that would rattle windows in downtown Huntsville, and could be picked up on a seismometer in Birmingham. The Rocket City was building its masterpiece, a rocket so big and so powerful that it could send humans to another world. Preparing that rocket required giant test stands to be erected here that would allow the rocket’s engines to unleash their full power without moving.

The tests worked. The windows stopped rattling. The rocket flew. Men walked on the moon.

I was too young for the window-rattling. But today, there’s a new rocket in the Rocket City.

The ultimate goal of Apollo was the moon. For Space Launch System, the moon is step one. Mars awaits.

The first version of the rocket, making progress toward launch in two years, will stand 322 feet tall. It will generate more thrust at launch than the space shuttle or the Saturn V. It could launch twelve fully grown elephants into low Earth orbit, were one so inclined. But since that would be cruel and rather bizarre, it will be used instead for a test flight to send an uncrewed spacecraft around the moon, farther than any Apollo capsule ever ventured.

The second version of the rocket, scheduled to debut three years later, will stand a foot taller than the Saturn V, and will include a new upper stage that quadruples the single second-stage engine of the first flight. The first crew to ride on this rocket will become the new record-holders for distance from Earth. After that, this configuration will be used to launch a series of ambitious missions into the Proving Ground of space near the moon, testing out new systems and capabilities that will prepare the way to voyage even farther out.

A final configuration will feature more powerful boosters, and will have greater payload capability than the Saturn V. With it, astronauts will finally leave their home planet and its moon beyond, sail through the dark void of space, and place the first footprints in the rusty regolith of the Red Planet.

Working as a contractor supporting the SLS program at NASA’s Marshall Space Flight Center, I have the privilege of following the progress as this incredible rocket take shape. Work is taking place around the country as the core stage is welded, and the engines and boosters are tested and prepared for flight.

And, now, increasingly, the rocket is making its way to the Rocket City.

As a space buff, it’s exciting to see the work nationwide. But as a Huntsville native, who grew up in the shadow of Marshall Space Flight Center, it’s particularly amazing to see what’s happening here. Two major pieces of SLS are being built at Marshall, the adapters that connect the second stage with the core stage and with the Orion spacecraft. Test versions of both have been completed, and the flight hardware is being prepared now. The second stage is built nearby in Decatur (can we declare I-565 “the Rocket Interstate”?). Right now, the test versions of the adapters and the second stage are being stacked in a Marshall test stand so that early next year they can be subjected to stresses greater than a rocket launch to make sure the real things are ready to fly.

Right next to that facility is a new test stand for the SLS core stage liquid oxygen tank, and not far from that – just past the historic stand on which the Saturn V first stage was tested – is the recently completed towering new stand on which that gigantic liquid hydrogen tank will be tested.

One can get a decent view of the stand on the bus tour through Marshall’s official visitors center, the U.S. Space & Rocket Center. Getting close to it, it’s an impressive enough structure in its own right, and when you realize this tower is still only about two-thirds the height of the SLS, you begin to understand just how big this rocket will be. But then you look around the area where it stands, the window-rattlingly historic neighborhood in which it resides, and you think about what happened the last times Marshall Space Flight Center built test stands like that.

The rocket is coming to the Rocket City. History is about to be made. Again.

But this time, you can keep your windows.

Find more from David at DavidHitt.com!