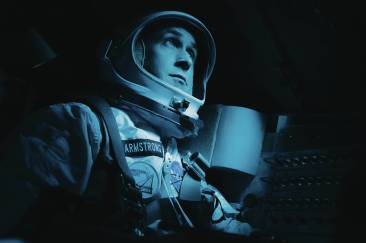 First Man is a space film that doesn’t have any specific ties to Huntsville.

There’s no scene at Marshall Space Flight Center, no hero shot of Von Braun looking at Saturn V designs, and not even a mention of the city at all.

However, you can still feel the bones of the city woven in throughout. Figures like Buzz Aldrin, Gus Grissom, and Pete Conrad, who are folk heroes still mentioned in tales tied to the city, are interwoven into the story of Neil Armstrong. The Saturn V is as visually present in the film as it is driving down I-565. Splitting time between family and NASA is something that many Huntsville residents know far too well.  It’s a struggle that the main figure in Neil Armstrong had to deal with, and it’s one that’s first and foremost as the main conflict in First Man.

First Man is tale that’s intentional and slowly paced as Armstrong himself was. It doesn’t over-romanticize space travel, it instead realistically presents the danger and claustrophobia of it. It doesn’t focus on the technical flight itself, but instead the plight of families that dealt with it. But most importantly, it doesn’t necessarily focus on one of the greatest human achievements, but more on the actual human behind it.

Rather than approaching the film as a traditional biopic, director Damien Chazelle (Whiplash, La La Land) tightens the focus of Armstrong’s life to the ten years of his career in NASA in the 1960’s. We see him brazenly risking his life as a test pilot and becoming buddies with other NASA flyboys, but just as importantly we see the rough times he had as he was forced to make tough choices in priorities. Choices that would sometimes by necessity lead him away from his own home and haunt him for years to come.

Armstrong talks with some of his fellow astronauts in a few scenes about some of NASA’s psychological tests, one of which is in a 60’s version of the Multi Axis Trainer. Astronauts would famously be pushed to the limit to be tested for the physical and mental endurance that would be needed to get to the Moon and back.  He toughens out the ride, asking for a second chance, but still barfs in the bathroom in secret.  It’s a great metaphor for the way he’d approach most challenges.

Ryan Gosling plays Armstrong with this kind of stubborn resilience and quiet dignity that was needed for him to deal with family struggles, some of which were just as challenging as getting to the Moon in the first place. This is where the film really shines, using the near miss of Gemini 8 and the tragedy of Apollo 1 as real-life metaphors for his own personal fight. By the time he lands at Tranquility Base to experience an environment that he’d never known, Gosling’s Armstrong finally finds the kind of peace he couldn’t find on Earth.

First Man is technically brilliant on so many levels, from realistic effects with a 60’s sheen to an authentic sound design that was actually partially captured at the Space & Rocket Center in town. It benefits greatly from a fantastic director who takes a very different approach from something like Apollo 13 or The Martian.

It’s gritty, realistic, and more personable. A perfect approach to one of the more mysterious and somewhat misunderstood heroes that’s woven his way through Huntsville folklore.