Downtown at a Crossroads: What Can Go in UG White’s Space? 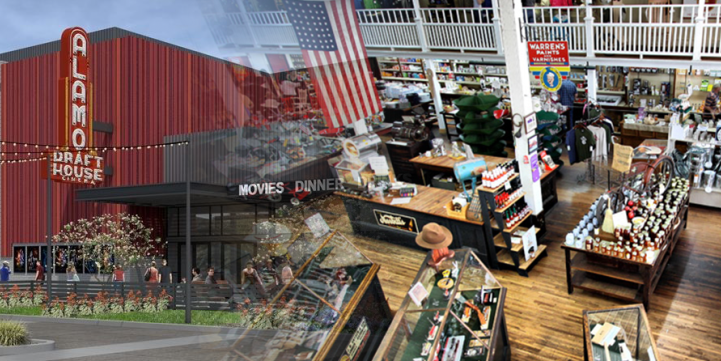 A few weeks ago, WHNT reported that after some recent smoke damage, UG White would be vacating their location beneath Pints & Pixels on Clinton Avenue.  Thankfully, Huntsville’s favorite barcade would survive the mishap, but UG White found itself unable to recover.

With the gift shop now closed, a great space in the heart of Downtown Huntsville is now open for new ideas and opportunities for the city.  Formerly the home to a great music hall that hosted the likes of Old Crow Medicine Show and Alabama Shakes, the space could feasibly be used again for the great entertainment option that the walkable area downtown is sorely lacking.

With that in mind, here are three of our ideas for what the space could be used for moving forward:

This is probably the most talked about option in Huntsville’s online circles.  While Madison County has plenty of big box and commercial options for seeing new releases, we have no option whatsoever for indie movies and re-releases.

The big brand that often comes up in these conversation is the Alamo Drafthouse.  They’re an Austin, Texas based chain that has specialized in indie movies, re-releases, special events, as well as typically housing a brewhouse and restaurant.  We think a two or three screen version of the Alamo Drafthouse is a perfect choice for the location.

As a geeky city, Huntsville is no stranger to gaming and E-Sports.  UAH has long been host to ChargerCon, and gaming nights or tournaments are a mainstay at locally owned spots like The Deep, Haven Comics, or Rocket City Arcade.

Having a venue that could serve as a place to host tournaments as well as show finals on the big screen could be a unique way that Huntsville can further put itself on the map as a geeky city.

All of these could be showcased on screens inside a great viewing venue in Downtown Huntsville.

Here’s the amazing thing: All three of these places could actually be in the same venue.  Not only would it perfectly serve Huntsville’s geeky demographic, but it would supply the entertainment option in the downtown area that is not only underserved, but completely inexistent.

Want to make it happen?  We’re gauging local interest and would love to hear from you.

If a venue like this is up your alley, we’d love to hear your input on our Change.org petition.  Sign it, and we’ll get everyone’s ideas and also show local officials how badly the local community wants to see this happen!