Cosplayer of the Month is a series of articles about a local or regional cosplayer. Andrew Dunn is a casual cosplayer and a hardcore geek, who talked with me about steampunk, nostalgia, and his brush with a world famous thief. 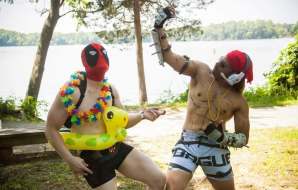 What got you into cosplay?

Given my other nerd habits, cosplay was a pretty rational next leap.  I’ve indulged in videogames, comics, Dungeons & Dragons, anime, etc. in some capacity nearly all my life.  I’ve even dipped a toe into the LARP scene.  The first time I cosplayed was the inaugural Splashcon in 2015—as a cabana-themed Deadpool (a Deadpoolboy, if you will) complete with a Hawaiian shirt and a Loch Ness monster pool float.

Are there certain fandoms you like to pull cosplays from?

So many.  Overwatch, Game of Thrones, Star Wars, comics- anything, really!  I can admit that it’s almost as much about the visual appeal when it comes to playing a character though.  I don’t snub my nose at a costume just because I don’t dig the source material.  If it looks cool, I’m in.

What was your coolest cosplay moment?

The one I like to tell most is this one time at a Dragoncon— I’m at a superhero-themed rave as “cyberpunk” Nightwing, and I feel someone in the crowd pinch my rear.  Turning around to scold the person, I catch sight of the culprit for just a moment.  It’s Carmen Sandiego, and she melts into a throng of people and is gone before I can follow.  Too well-played to even get mad about.

Do you have a favorite cosplay?

(Of mine?)  That’s tough.  I would say my cyberpunk Nightwing, for the labor of love that it was.  A glowing EL panel and a touch of urban dystopia really complement the already awesome Dick Grayson black and blue, and I even put some effort into learning some (very basic) escrima flourishes.

(Of anyone ever?) There was this kid who did Zordon from the original Mighty Morphin’ Power Rangers.  He painted his face silver and wore this huge rig around his head that looked like the command center with action figures affixed to it.  The whole thing had this painstaking attention to detail.  I was totally awash in nostalgia.

What is your favorite thing about going to a convention/cosplay meetup? 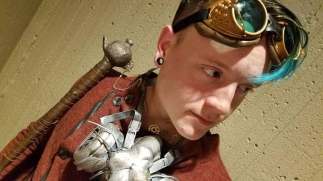 Passionate, uninhibited nerds expressing their love for something dear to them.  Also, just the absurdity of it all.  Imagine Pikachu, the ghost of Stonewall Jackson, Cersei Lannister, and Commander Shepard in line at the same food court.  Now imagine that everywhere you look.

Are there any future cosplays you plan on doing?

Thane Krios from the Mass Effect series springs to mind.  And if I can ever get my figure back, Daenerys from Game of Thrones.