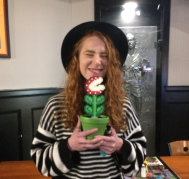 Brooklin Johnson is one of the latest members to the Geek Out Huntsville team, she is a local geek, animal lover, music festival enthusiast, artist, and otherwise jack of all trades!

She attended the Huntsville Comic and Pop Culture Expo at the Von Braun Center this weekend and has this report for us.  Also thanks to Chelsey Ray of Rays of Light Photographyfor the photos from the Con!

Standing in a sea of Power Rangers, stormtroopers, and a variety of anime characters of which I had never seen I thought to myself … this is where I belong: The Huntsville Comic and Pop-Culture Expo!  Probably the largest con in the area, the perfect opportunity to meet some some fellow geeks to argue about ones opinion about the next Doctor being a female.

If you attended this weekend, you probably ran into Kevin Sorbo (Hercules), or your inner child freaked out over meeting comic artists such as Fabian Nicieza (creator of Deadpool), or my personal favorite Mark Bagley (Spider-man artist). If you are a Power Rangers fan, you had a chance to meet Austin St. John (Red Power Ranger) and Johnny Young Bosch (Black Power Ranger) .

Many cosplayer groups attended as well such as the 501st, and the NACC.  With the 501st was R2D2, BB8, stormtroopers, an imperial guard, and many more Star Wars characters. They’re known as “bad guys doing good.”

With the NACC was Thor, Harley Quinn, Poison Ivy, a Ghostbuster, Jacob Frye (Assassins Creed Syndicate), and many more. They also had a hand crafted Iron Throne, the perfect photo op for a Game of Thrones enthusiast.

Exploring around the expo gave you the opportunity to not only see all the unique cosplays walking around but it also gave you the opportunity to find some pretty cool merchandise. The whole place was covered in booths with vintage action figures , hand crafted “nic-nacs,” video games, posters , comic books and much more. There was also free candy at the majority of the booths !

Thanks to Rocket City Arcade, we had a real treat. They had loaned the expo a handful of their machines including, Mrs. PAC-MAN, Mortal Kombat, TMNT, and more to create a free miniature arcade.

Before Saturday came to an end, the NACC held a cosplay contest. I was so surprised at how many contestants attended . Every costume had amounts of creativity, and most of them stayed in character so well, probably making it a tough decision for the judges to decide on winners.

A couple of my personal favorites include Edna Mode (The Incredibles) who teased Thor about his cape. Tony Stark was hilariously lugging his Iron Man suit around, and Mike, Dustin, and Eleven, the adorable kids from Stranger Things were there as well. Honestly they where all brilliant!

All in all the expo was a magnificent experience! I’ll let you in on a little secret, it was my first con, but definitely not my last.  I hope you guys enjoyed it as much as I did and if you didn’t go , there’s always next year, and other cons around the vicinity! As they say in Star Wars, may the force be with you ! 👋🏼